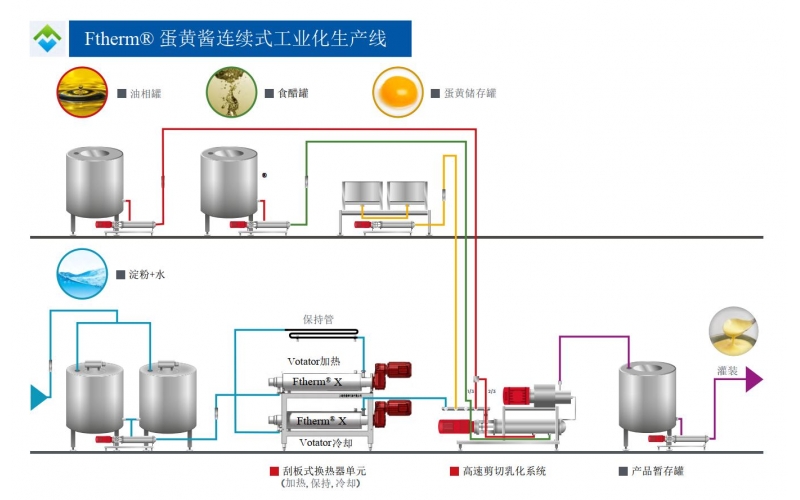 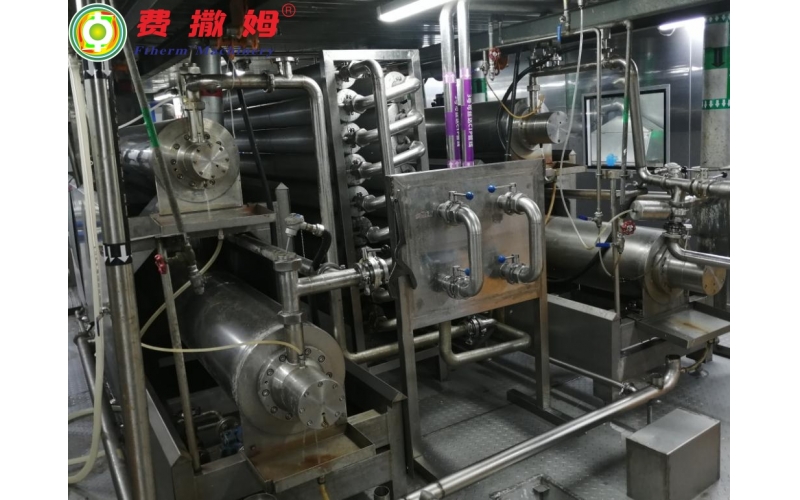 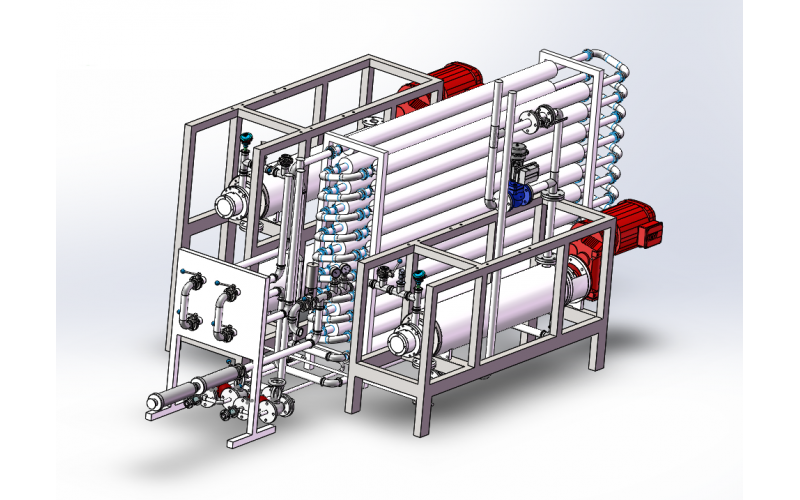 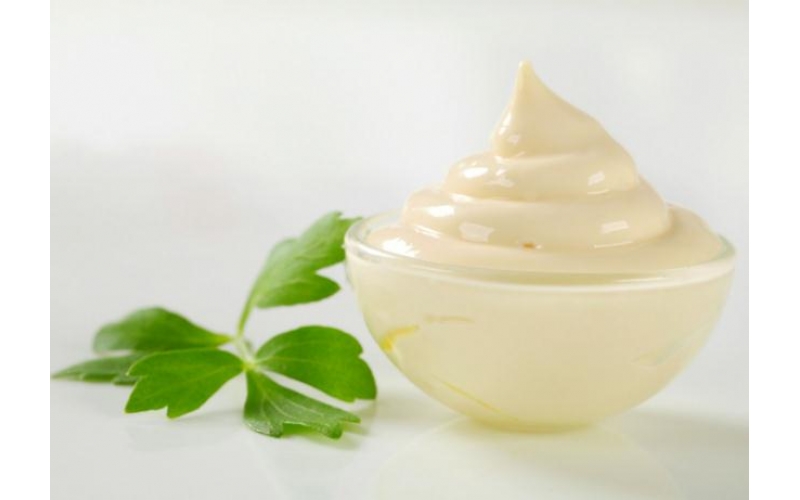 Mayonnaise is a so-called oil in water emulsion. When producing mayonnaise, the oil phase is divided in o droplets, size 2 to 10 microns, where the majority should be around 3 to 4 microns.

Mayonnaise is a so-called oil in water emulsion. When producing mayonnaise, the oil phase is divided in o droplets, size 2 to 10 microns, where the majority should be around 3 to 4 microns. To divide the oil phase in o droplets, energy is needed, which is generally applied by high shear mixing. Without using high shear force, the oil droplets would gather again after some time. The resulting fine dispersion of minute droplets of oil and water is called emulsion.

In order to assure a stable emulsion, the surface has to be covered with a so-called emulsifier. The emulsifier is an ingredient that in a chemical sense has an oily and an aqueous side. The oily part of the molecule will penetrate in o the oil droplet, whereas the aqueous side will be pointed at the surrounding aqueous environment. In this way, the emulsion is stable and becomes the desired high viscosity. The emulsifier in classic mayonnaise is mainly lecithin, of which the source is egg yolk.

FACTS ON MEDIUM AND LOW-FAT MAYONNAISE

In medium and low-fat mayonnaise, the water phase is bound by starch and/or gums. The oil content is too low to get an emulsion that is stable and viscous. However, by “thickening” the water phase, viscosity and stability are achieved. The size and deviation of the droplets are hereby still important, but not as critical as in full-fat mayonnaise. In low-fat recipes the role of egg yolk-based lecithin can be fully covered by starch, eventually starch and gum (xanthan gum).

WHAT IS VEGAN MAYONNAISE AND HOW IS IT MADE?

Food products can be labeled vegan when all ingredients are plant-based. In other words, meat, dairy, and egg-based ingredients are a no–go. For mayonnaise, this has consequences. Depending on the recipe, some 2 to 10% of the total recipe is egg yolk. This is the case when liquid egg yolk is used, but it is no different from the equivalent when using egg yolk powder.

In principle, the processing of vegan mayonnaise is no different than egg-yolk-based mayonnaise. Both in batch emulsifying systems and in continuous emulsifying systems, the process steps can be left unchanged, but: is to be expected that the efficiency of soy-based lecithin is somewhat lower than the efficiency of egg yolk-based lecithin. Therefore, the other influencing process parameters can be critical and should be optimized. Temperatures of the oil and water phase when entering the emulsifier can be optimized by pre-cooling. Additionally, pre-mixing before entering the emulsifier area is a further possibility to improve emulsifying. Obviously, the emulsifier itself is an important factor and the shear force, retention time, and retention time variation are all additional key factors to take in o consideration. 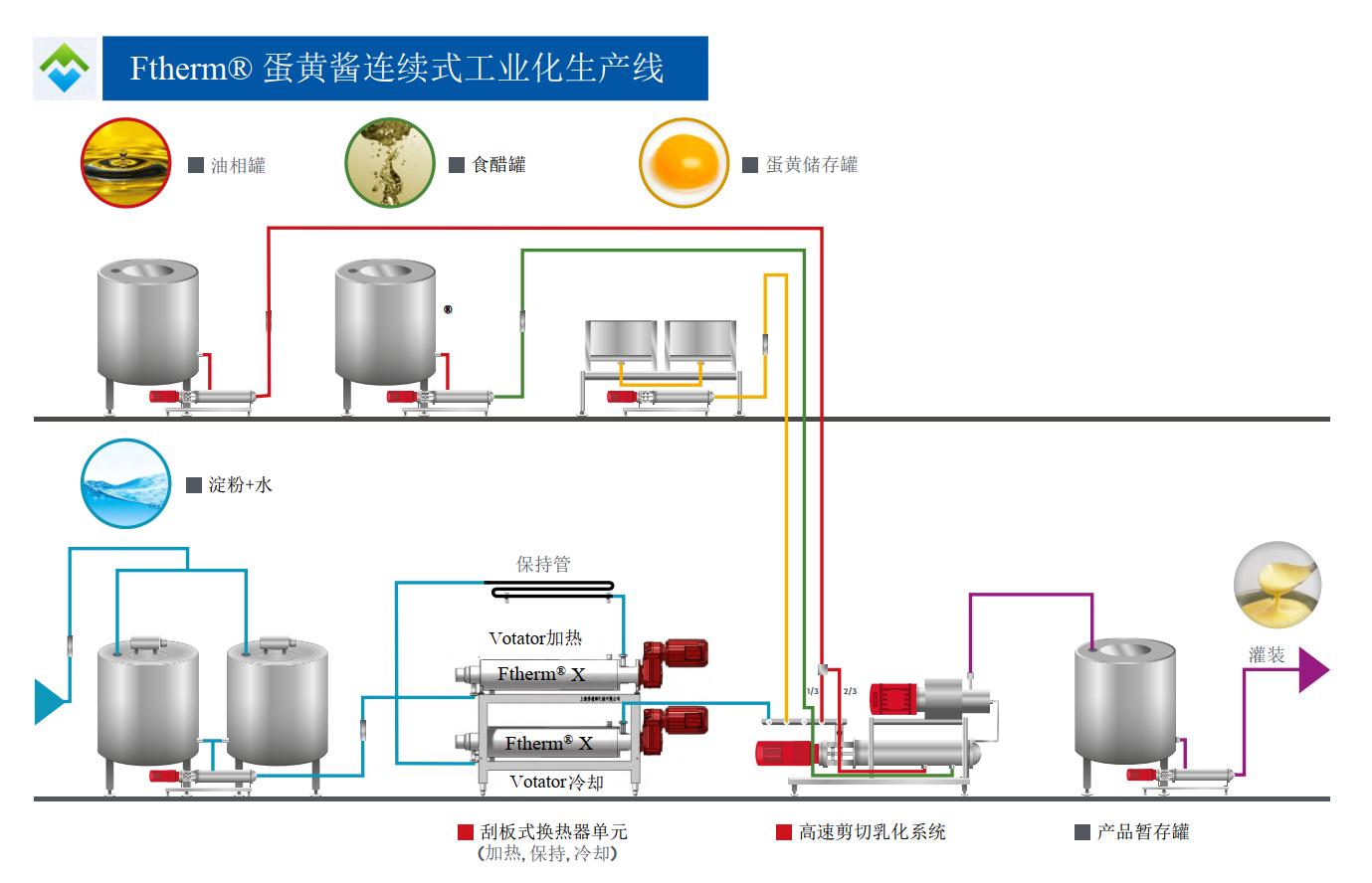 Salad dressing and custard are commonly used sauces in the baking industry, and it is common for manufacturers to compare them. In terms of product system: Custard belongs to starch gelatinization system, while Custard belongs to oil-water emulsification system. The salad dressing system itself has a certain antibacterial effect due to its own acidic environment. Custard can only pay attention to sterilization and post-contamination refrigeration during the production process, and the system itself has no antibacterial ability.

During the gelatinization process of starch, it is easy to form a coking film on the heat exchange surface. The coking film not only affects the heat transfer but also affects the quality of the product. Therefore, wall scraping and stirring are particularly important for the production of Casda. Considering quality issues such as material sterilization and microbial control, our company recommends the use of a continuous starch gelatinization system. The configured slurry passes through the continuous heating heat exchanger, high temperature maintenance tube and cooling heat exchanger under the push of the conveying pump, and the continuous process efficiently completes the starch gelatinization and sterilization process.

The scraped surface heat exchanger produced by Ftherm Machinery has the following characteristics:

2. High heat transfer performance, three to four times that of other heat exchangers, and more homogeneous and emulsification.

5. The sealing performance is good, and the mechanical seal that meets the hygienic standard is adopted, and the service life is longer.

This product is used to assemble in o a continuous Shida sauce production system, with stable product and high production efficiency.

Our company provides a complete set of Custard production equipment.